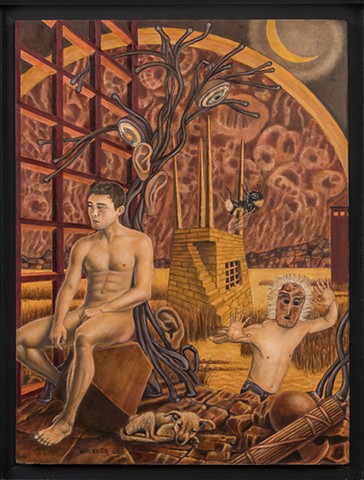 This painting, inspired by Albrecht Durer's "Melancholia 1," was done during the Covid Pandemic and the last year of the Trump presidency. Hopes for the future of the planet and for a non-fascist government were bleak. The bumblebee impaled on the gold prison speaks to the destructive force of greed. We're all that bee. There's a ghostly and flaming sky. Surveillance Capitalism appears. There's a malnourished dog and a young man wearing a tribal mask. Masked rituals have had many powers ascribed to them, including healing psychic illness and restoring mankind to a pristine state.